Who is playing in the Clouds?

The world’s top cloud providers made $11.2 billion in revenue selling raw compute and storage power as virtual services in 2015, according to a report by Structure Research. It forecasts that collectively this group will reach more than $120 billion in revenue in 2020, growing the market more than 10-fold in just five years.

Based on estimates from both Gartner and Structure Research a bigger and bigger piece of the IaaS cloud pie will be taken by the biggest players in the space.

Aggressive cloud market growth forecasts are good news for the largest wholesale data center service providers, who have been unable to build data center space in key markets quickly enough to keep up with demand for capacity from the top cloud providers.

Who is Big Enough?

The report takes a narrow scope, focusing on pure Infrastructure-as-a-Service and looking at seven companies Structure Research considers to be raking in the most revenue from IaaS. This is revenue only… not profit which is harder to obtain.

The largest cloud provider by far is Amazon Web Services, which by Structure’s estimate made $7.88 billion in revenue from IaaS last year. The company currently holds just over 70 percent of the market.

Microsoft is a distant second with close to 11 percent of the market and $1.2 billion in IaaS revenue. 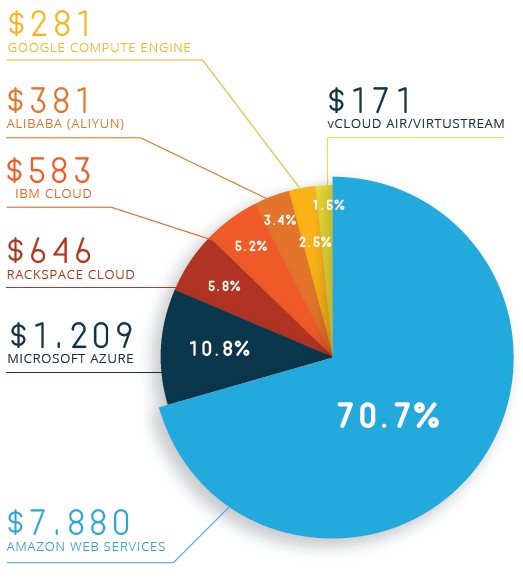 Portions of this post are from:  BY YEVGENIY SVERDLIK ON JUNE 7, 2016