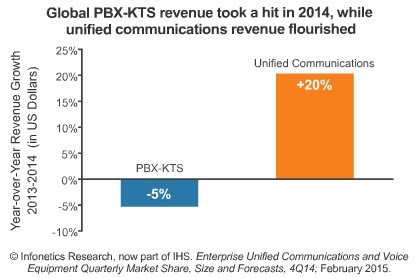 The overall market decline masks the health of the evolving UC applications segment, which jumped 20 percent in 2014, energized by the demand for tools to increase workforce productivity.

“The enterprise telephony market continues to be tough. Just as we see one area begin to improve, it’s offset by slowdowns in geographies or market segments. Underscoring the declines are not only slowing businesses purchases but also competitive pricing, which has created unpredictable swings,” said Diane Myers, principal analyst for VoIP, UC, and IMS at Infonetics Research, now part of IHS. “The move to the cloud is having an impact in certain markets, particularly North America.”

Microsoft continues to see strong sales on the UC front, solidifying its position atop the unified communications market share leaderboard