77% of American adults own a smartphone.

The US smartphone use in 2018 places Americans at #8 on the global scale.

People read almost half (49.1%) of all emails on mobile devices.

This is an average percentage because smartphone ownership statistics show significantly lower use of smartphones in certain parts of the world.

Smartphone usage statistics define Youtube as the most used app with 81.9%, followed by Facebook with 75.7%. Next in line are Google search, FB messenger, Google maps, Gmail, and Google Play.

Well over half of American households are now wireless when it comes to phone service.  Of the other households, most of those have both wireless phones and landlines.   There are only a few – approximately 5% – who have a landline only.

History of the Smartphone:  On October 13, 1983, Ameritech Mobile Communications became the first company to launch a 1G phone network in the US, starting with Chicago. On March 13, 1984, the 2 pound Motorola DynaTAC 8000x went on sale—for $3,995.

But the true smartphone revolution didn’t start until Macworld 2007, when Steve Jobs revealed the first iPhone.  Previous phones relied on keypads and could only navigate a watered-down version of the internet. The iPhone’s large touchscreen could flip through websites just like a desktop computer, all while looking sleeker than anything consumers had ever seen before. 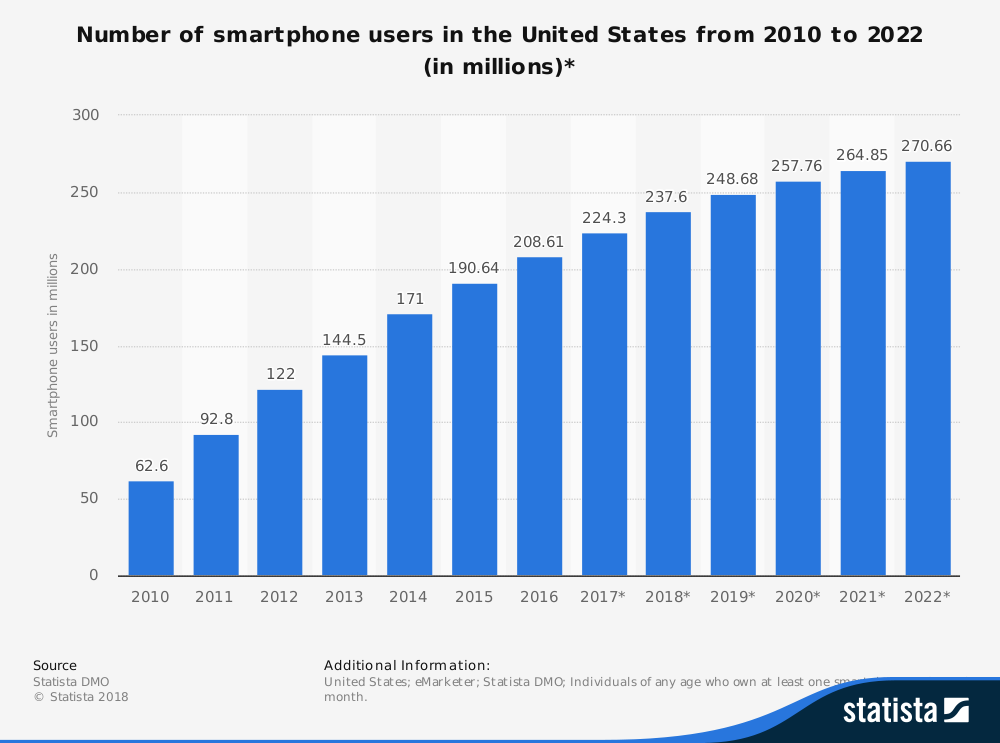 In 2018, there were around 1.56 billion smartphones sales worldwide.

With the world’s population at over 7.691 billion, these smartphone numbers show approximately 20% of all people got a new smartphone last year.

Over 50% of smartphone users are addicted to their phones.

Depending on how you define addicted this stat is a little scary.   But in any case smart phones have only been around in a big way since early 2000’s but it is clear that they are here to stay.